The Value of a Chair

On a cold January day, with the threat of snow, I was given a warm welcome at Penarth Masonic Hall, for an event to celebrate hospices in Wales and the exceptional support that the South Wales Freemasons provide such worthwhile organisations.

Last summer, we received donations totaling £5,800 from the South Wales Freemasons and the Masonic Charitable Foundation, and my visit was an opportunity to explain how this hard-earned money had made such a significant difference to our patients, and the care we deliver throughout Cardiff.

To start my talk, I held up a large photograph of a brightly coloured, high backed chair. A little unsure how my artwork would be received, I soon realised that I needn’t have concerned myself. I was clearly surrounded by a friendly group keen to know more about our work. I explained how this chair, along with 20 others were purchased using the donation, and that the chairs were sturdy, suitable for the needs of our patients, and with our patient numbers exceeding more than 1,000 every year, these chairs would be put to good use. 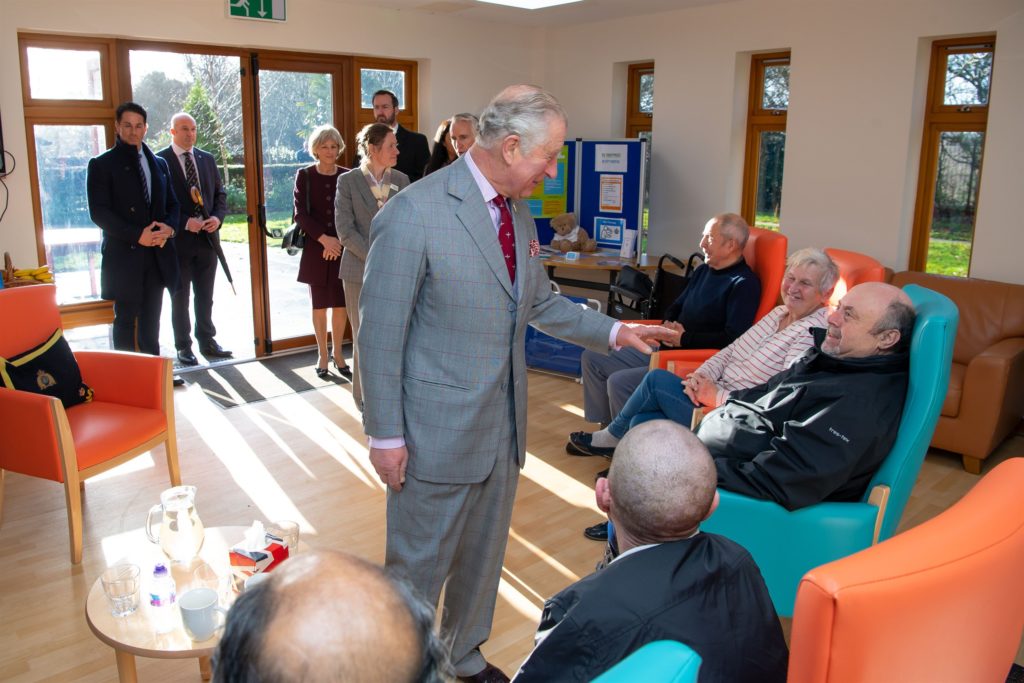 I then went on to explain the types of situations where you would see these chairs; used during our MND clinics, at our bereavement coffee mornings, group counselling sessions, and our Day Centre where patients are welcomed every week, to enjoy social activities whilst in a supported environment with time to see a nurse, doctor, therapist or welfare officer.

To illustrate the significance of our Day Centre, I shared a story of a patient, from an email that was sent to me only a few days before. It read…

“My Dad Marian Milewski was born in 1922 in a small village in Poland, one of 13+ children. He was 17 when the war broke out and became active in the Polish Resistance in Warsaw and was in the Warsaw Uprising, enduring unimaginable hardships.

He was smuggled out of Poland after the war and eventually settled in Cardiff, marrying in 1949 and having 2 children, myself and my sister.

Dad suffered from ill health from the age of 50 when he had the first of many heart attacks. He lost his wife in 2002 and although fiercely independent needed support from us to deal with this new stage of his life. He was determined to stay in his own home and fought ill health with the same determination that had seen him through many difficult times.

After yet another severe heart attack in January 2016 he spent a couple of months in hospital being told it would be difficult for him to live alone in his home again and us being told that if we insisted on taking him home it would only be for a very short time.

It was what he wanted and so he went home and this is where City Hospice stepped in.

They gave us practical and emotional support during which was a difficult time for us all. They were always at the end of the phone if we needed any help or advice but most importantly of all they cared for Dad. They arranged for him to be picked up and taken to their hospice for afternoons where he could socialise with others and enjoy various forms of entertainment whilst at the same time the lovely nurses were quietly monitoring his condition and taking care of him without him realising.

Towards the end of his life he was awarded the Warsaw Uprising Medal for his participation in the Warsaw Uprising. When he mentioned this to the Hospice they made a fuss of him and took photos to include in their newsletter. They made him feel special.

Dad passed away shortly afterwards aged 95, loved by all of us as always but also loved, supported and most of all respected by all the lovely people at City Hospice.

Thank you so much everyone.”

I felt hugely privileged to read Lynda’s story, and though I felt emotional speaking these words, it was clear that many of the audience were also clearly moved.

I thanked the South Wales Freemasons for providing us with the tools to help us to do our job, delivering exceptional palliative care and support for families. I heard a ‘hear hear’ from a member of the audience, with much applause as I returned to my seat. As I looked around the room at representatives from hospices in other areas of South Wales, I could see just how much palliative care meant to the Freemasons, and like every day, I was proud to represent City Hospice, Cardiff’s local hospice.