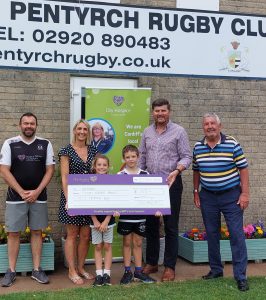 Matty sadly passed away in August 2020 in the care of City Hospice after battling cancer. He was a big part of the rugby community, he played at all age levels and helped coach the juniors. Close friend and team-mate Phil Smith said, “We have planned to do a memorial event for Matty for a long while now but due to Covid-19 we’ve had to postpone”.

Once restrictions were lifted Phil organised a day which involved a rugby match between friends and former teammates, an under 9’s match with Matty’s son, George playing alongside hot food for all friends and family that attended.

“We were delighted with the support and the attendance, it showed just how much people thought of him. As Matty and his friends were cared for by City Hospice, we all agreed that this charity should receive the funds”.

“Thank you so much to Phil and the community at Pentyrch RFC for raising an incredible £1,500 for City Hospice. It was a great day in memory of your friend, and the money raised will make a huge difference to our work”.