Light Up A Life – Sharon’s Story

Sharon sadly lost her husband Kevin in August 2019, after a three-year battle with Oesophageal Cancer. Kevin was 62 years old and received support from City Hospice during his final months. Kevin was a big lover of sport, especially rugby, and even managed to fulfil one of his lifelong dreams of watching Wales play rugby in New Zealand in June 2016. Known for being ‘like a juke box’, Kevin was always singing at gatherings and seemingly knew the words to most songs. Described by his wife as loving, loyal and so very caring, Kevin and Sharon were married for 35 years, and enjoyed a lovely life together, surrounded by family and friends. 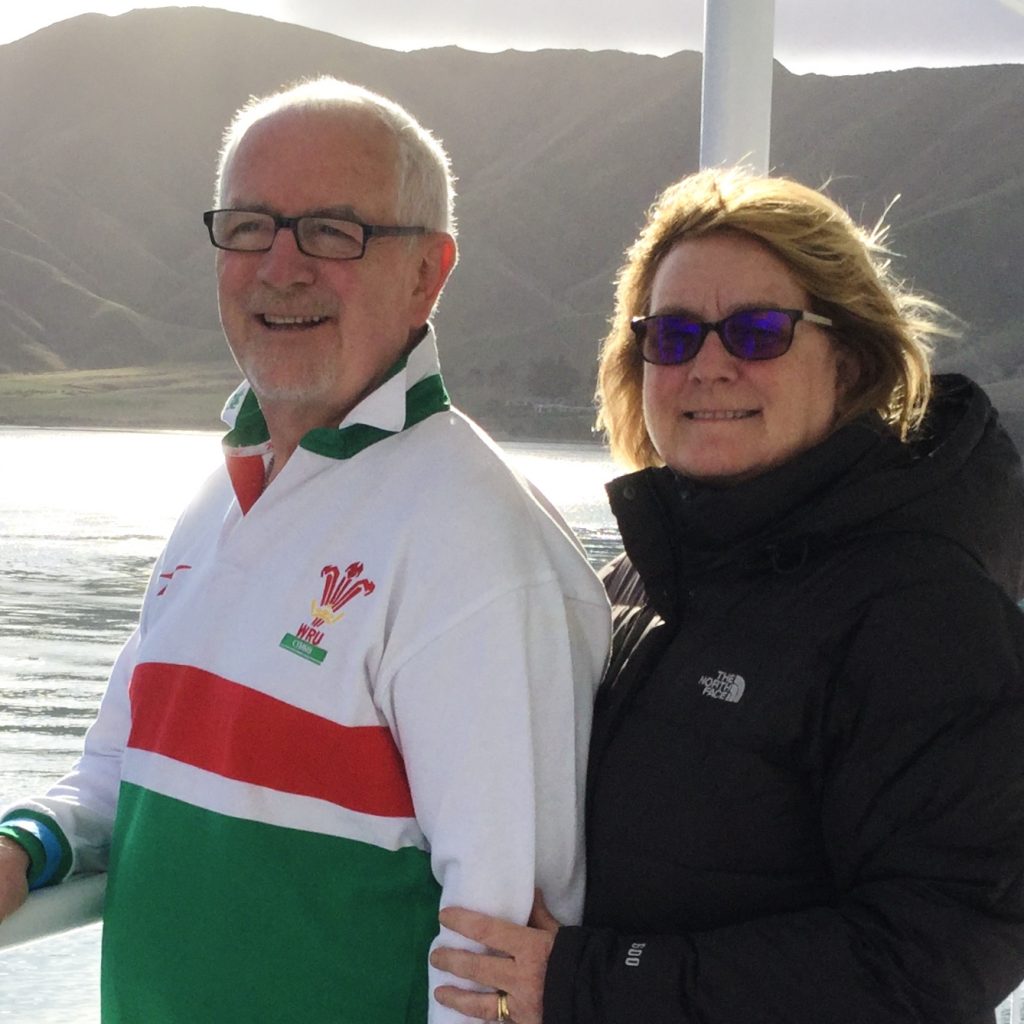 By the following February, Kevin started having trouble swallowing, and by May 2018 he was told the cancer had returned in his neck. After more chemotherapy and radiotherapy, a long stint in hospital being fed intravenously, plus attempts to fit a stent and tube down his throat, Kevin was sadly told his cancer was terminal.

Sharon said: “Kev was so positive right the way through, and even appeared in BAFTA Cymru award winning series ‘Hospital of Hope’ back in 2018, before his terminal diagnosis. His positivity really got us through such a tough time.”

Speaking about the involvement of City Hospice, Kevin’s wife Sharon said: “Once Kev’s terminal diagnosis was made, we were passed over to the City Hospice palliative team, and soon met Kev’s palliate nurse. We were instantly reassured that she would only visit when we needed her but that the team was always on the other end of the phone. She went through all the paperwork with us, contacted the district nurses when needed and more importantly, she spoke to our GP, so we never had to worry about speaking to or calling a doctor out.

During his palliative care, Kevin made the remarkable decision to arrange and pay for his own funeral, taking the burden off his family.

Sharon said: “A couple of days after Kev came home we were lying in bed and we were chatting and he just came out with “I want to arrange my funeral and need to start now, so we can put it all in a box and start living”.

“Kev arranged absolutely everything, from the burial plot at the Natural Burial Meadow, to the entire order of service. He even wrote his own letter to be read out by his brother in law to the congregation. No one was allowed to see or read it before the funeral. It was just like Kev was reading it to us all.

“Everything was arranged and put away in a box like he said. Unfortunately, Kev didn’t have much time after that to carry on living, but we did manage to do a few things that he wanted to do, especially a trip to London in May for our 35th wedding anniversary.

“On the day of the funeral, I felt so proud to be his wife. He had everything he could have wished for, if not more. The sun shone, the church was full to capacity, and it was the most beautiful place you could wish to lay. We even received donations of over £1,500 to be split between City Hospice and Holm Tower.

Speaking about how City Hospice supported her following Kevin’s passing, Sharon said: “After Kev’s passing, I had a lovely card from the team, saying how sorry they were and inside was some information about the Bereavement Coffee Morning at the Hospice, as well as one to one counselling.

“I was a bit reluctant in the beginning, thinking ‘I can deal with this on my own’. I had gone through so much in the past three years, I was strong enough to deal with losing Kev, but never was I so wrong.

“I decided to give the counselling a go, and after the second session I could see that it was really working for me. I saw Sue, my councillor, as my Kev. I would go in and just talk about everything and she would listen and help me to think about what was on my mind.

“I also really started to enjoy the coffee mornings as I could really relate to what other people were going through. All this has given me a focus and a reason. I’m thinking of taking a counselling course myself, so hopefully I can help at the Hospice and give them something back for all they have done for us, as this was one of Kev’s wishes. Before he died, Kev said to me ‘eventually your friends and family will lose their partners too, and by doing this course, you can really be there for them when the time comes’, and so that’s exactly what I’m going to do.”