Light Up A Life – Lynn’s story

Lynn sadly lost her husband Ron in May 2020, following a diagnosis of lung cancer nine months earlier. Ron received support from City Hospice as soon as he was diagnosed, with the charity providing care for him at home before and during the Coronavirus pandemic.

A former Chartered Accountant, Ron was at his happiest when socialising with family and friends. Despite mobility issues due to the effects of Parkinson’s Disease, Ron was still enjoying eating out and spending time with loved ones right up until lockdown restrictions were introduced in March 2020. 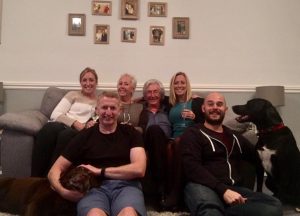 Ron first noticed something wasn’t right after feeling congestion in his chest in the summer of 2019. He was sent for an X-ray and sadly diagnosed with terminal lung cancer.

Ron’s wife Lynn said: “Although Ron had a feeling his symptoms could be lung cancer, we were both stunned when it was confirmed, and we were given an initial prognosis of four to six months.”

As soon as Ron received his diagnosis, he was transferred into the care of City Hospice.

Speaking about the involvement of City Hospice, Lynn said: “We already knew of the hospice and the fantastic work they do, as my father had been referred to them for palliative care three years earlier.

“Our City Hospice nurses were a great source of reassurance for both of us, especially as we entered new territory when Covid restrictions were introduced. They cared for Ron, helping him feel comfortable at home, and kept us up to date every step of the way.

“While Ron, a dedicated family man, may have preferred to spare us from the challenges of day-to-day end of life care, he really appreciated the support we received from City Hospice at home. The restrictions imposed because of the pandemic did allow myself, my daughter and son-in-law to be with him at the very end which we would not have been able to if he had been admitted.”

Since his passing, Lynn has fundraised for City Hospice to say thank you for the care that both Ron and her father received at the end of their lives, as well as the counselling Lynn has received which she credits for helping her through some very painful moments of grief.

Lynn said: “Last year I donated a day of nursing care in memory of Ron on his birthday and some friends and I donated to the hospice in lieu of gifts to each other at Christmas time. I was keen to support the charity again this year. As soon as I heard about The Sparkle Walk and found out it fell on the weekend that would have been Ron’s birthday, I signed up along with my daughter Katie! It was so special to join other families who have experienced the care of City Hospice and share memories of our loved ones.” 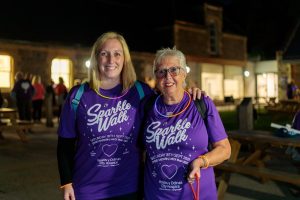