Light Up A Life – Eben’s story

A popular journalist, football fan and prolific park-runner, Kevin Leonard lived in Cardiff with wife Eben and children Max and Mari. Following a diagnosis of lung cancer, Kevin was cared for at home by City Hospice until he sadly passed away in February 2021.

Super-fit runner Kevin first noticed something wasn’t quite right when he took half an hour, instead of his usual 19 minutes, to complete his weekly Parkruns. This, combined with a persistent cough, prompted him to visit his doctor.

Following two courses of antibiotics, a trip to A&E for breathlessness and further scans, Kevin was sadly diagnosed with lung cancer in December 2019.

Speaking about his illness, Kevin’s wife Eben said: “The doctors said that they had found blood clots on his lungs. They explained that the clots were a sign that the blood was changing and getting stickier in the right lung, which is a sign of cancer. It came as a huge shock to us all.

“We received the worst possible news in March 2020: the cancer had progressed to stage four meaning that it had spread. The only treatment left available to Kev was immunotherapy and chemotherapy. It was devastating but the oncologist explained the immunotherapy and that was a game-changer for us because it gave us more time and we were able to celebrate one final, nice Christmas before his health deteriorated.”

During this time Kevin was cared for at home by City Hospice’s specialist palliative care team.

Eben said: “We couldn’t have done it without the help of the City Hospice nurses; the care they provided was immeasurable. It was thanks to them that Kev was able to stay at home with us, safe from Covid. They would visit us daily, manage his symptoms and help keep him comfortable and stable.

“They were also great for me because they were able to gently prepare me for what was to come. I think I still tried to hold onto some hope, but they could read what was happening and helped me through it.”

Six months after his passing, the family decided to turn their grief into a positive and used Kevin’s love of sports to raise funds for the hospice.

September became ‘Run 50k 4 Kev’ month with family, friends, colleagues and the local community, as well as supporters further afield in the UK, France and Australia, coming together to run, walk or cycle 50km. The challenge, along with additional donations, has raised over £20,000 for the charity.

Eben said: “Losing Kev at the age of 51 to the cruel disease of lung cancer has been heartbreaking but City Hospice have always been there for us, particularly in the darkest of times. We wanted to give back to this incredible charity and we couldn’t think of any better way than putting on our trainers and combining the love Kev had for the outdoors with fundraising to say thank you.

“The response to the challenge has been amazing. Running to fundraise seemed like the right thing to do and we are so grateful for the support everyone has given which will help City Hospice continue to provide their excellent care and services in the community.” 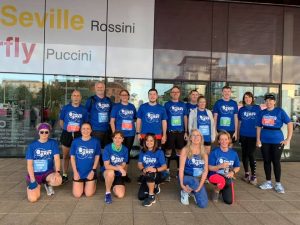