Charlotte Dix is taking on an challenge to raise money for City Hospice.

Charlotte’s 870-mile Welsh coastal walk is raising vital funds for City Hospice, in memory of her dad Robert who sadly passed away in 2020.

Robert was diagnosed with mouth cancer in the summer of 2019 and underwent treatment, optimistic that it would be successful due to an early diagnosis. After several months, Robert was given the all clear, but sadly, later received a terminal diagnosis in May 2020, and was admitted to Llandough Hospital. Due to COVID-19, restrictions meant that only Charlotte’s mum was permitted to visit.

After a three-week hospital stay, Robert was given the choice to move to a hospice or to be cared for at home – he made the decision to spend his remaining time at home, so that he could have his family and dogs at his side for his final months. He received specialist palliative care from a City Hospice nurse, before he died just 10 days after returning home. 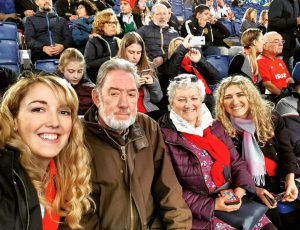 “The professionalism, care and compassion of both Dad and our family was an incredible comfort at a very difficult time. With cancer affecting each and every one of us in some way and at some point in our lives, I can’t think of a worthier cause.”

Having previously done a marathon trek of the Gower peninsula in

2021 for Macmillan, Charlotte wanted to take on an even bigger challenge in memory of her dad – and an 870-mile trek along Wales’ coastline certainly fits the bill! This year also marks the 10-year anniversary of the Wales Coastal Path opening in 2012, making Wales the largest country in the world with a continuous path around its entire coast.

Charlotte explains more about the challenge:

“It’s 870 miles in total, running from Chester to Chepstow and I’ve decided to hike all of it! Due to work commitments, I can’t hike it all in one go or in any particular order, but I aim to complete it by the end of Summer 2023. I started the challenge on 29th January 2022 and have completed just over 120 miles so far, mainly around the South Wales Coast and Carmarthenshire. This included a 22-mile hike in the Gower where I couldn’t decide which Gower beach to visit so I did them all – from Rhossili to Caswell Bay. I can tell you the sand dunes at Three Cliff’s Bay about 18 miles in were pretty brutal! The challenge should take me 77 days in total and the further away from my hometown of Cardiff I get, the more planning and organising is required. I’m chipping away but still have many miles to go!” Charlotte has been supported by her family, friends and colleagues, with some even joining her for parts of the trek.

“There are lots of things I’m looking forward to, such as taking in some of the Welsh scenery and landmarks like St Govan’s Chapel and Stack Rock Fort. Being a bit of a foodie, I recently read Wales Online’s Top 50 Welsh Restaurants article and have already mapped out the restaurants that are along the Welsh coast and made some dinner reservations along the way. It would be rude not to…”

Charlotte is planning the final leg of her hike to end in Cardiff Bay, so that her family and friends can join her on the last few miles – or cheer her on at the end point! – with a view to completing the trek in September 2023. She still has some way to go, but we’re sure she will smash it!

We are so grateful to Charlotte for choosing to support us. City Hospice relies on £2m a year in donations in order to provide free of charge end of life care to patients and to provide continued support to their families, from dealing with a loved one being diagnosed with a terminal illness to bereavement support. Charlotte’s fundraising efforts will help us to ensure that we can continue to provide care to families who need it most.

If you’d like to support Charlotte and follow her journey throughout her challenge, make sure you check out her Just Giving page for the latest updates on how she’s getting on.

Find out more about the work of City Hospice