Jeff Aston is running the 40th London Marathon in Cardiff  for City Hospice in memory of his wife, Val.

Jeff Aston “Ever Present” is a common site around the streets of Whitchurch and Rhiwbina on his training runs. This would have been the 40th London Marathon for 73-year-old Jeff. Jeff is a member of Les Croupiers Running Club. He is one of an elite group of runners known as the “Ever Presents”. Incredibly this group have  completed every event since its inauguration in 1981!!  This group has inevitably diminished over the years and now just 10 remain.

This year, due to the coronavirus, with the exception of a few elite competitors the event is closed to all athletes and spectators. However the organising body are keen to maintain the culture and challenge for this special group. So they are arranging for the “Ever Presents” to compete on the same day over a route close to their homes. This gives us the first opportunity for his friends and fellow runners to support him en route or at the finish.

Jeff  Aston “Ever Present” has many running achievements 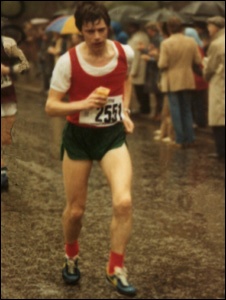 Besides his London Marathon achievement he has also competed in all 174 cross country events in the Gwent League over the last 35 years. He has represented Wales in the Home Countries Veteran Marathon Championships and the Cross Country Masters.

Jeff’s life has been touched by loss. His wife Val, who may be known to some of you, was a loved and renowned Chemotherapy Nurse Specialist in Velindre. Val died of cancer in 2016. Jeff is  raising funds for the City Hospice on behalf of Val who helped many patients who were also supported by the Hospice.

My wife Valerie died of cancer in 2016 and she was supported by the City Hospice.  Val was a Chemotherapy Nurse Specialist in Velindre Hospital. Many of her patients were also helped by City Hospice. I want to dedicate this, my 40th London Marathon to her memory.

Jeff hopes to complete the challenge at about 4.00pm in front of City Hospice, Whitchurch Hospital Grounds, Park Road, Whitchurch on Sunday 4th October. This is the Route Jeff will be running

There to welcome him will be representatives of City Hospice and Les Croupiers Running club. These will include some of the original line up who accompanied Jeff on the “First London” in 1981. Sean Tresilian, Maurice Prendergast, Mick McGeoch; also an Everpresent for 22 years and who has represented GB in the World Championship 100km and Les Croupiers Chairman John GriffinBEM.

It’s an incredible achievement to complete a London Marathon let alone take part in every one over the last 40 years!  It must be so disappointing not to be running in London this year on this 40th year. However, we are delighted that Jeff has chosen to run this year’s virtual event in aid of our charity City Hospice and we look forward to supporting him”.

Find out how you can take part in a virtual challenge